How do you make a good bakkie better midway through its model life? Simple, really. Change the front end and the bumper, tweak the interior and leave the rest well alone. Well done then Ford for keeping the Ranger’s recent facelift to just the above.

It means there’s no change to the Duratorq intercooled variable geometry turboed common-rail diesel. Seems 380Nm of torque from 1800rpm and 115kW from 3200rpm is plenty for a workhorse.

Interior instrument lighting has been given a red cast, an improvement on the previous orange, but the leather, electric windows and mirrors, aircon and general layout remain identical in XLT spec. Maybe it’s time to bring in a multi-function steering wheel and cruise control to keep up with the rivals. For now you get quality plastics and the simple, functional, clutter-less basics that most buyers obviously want. Four airbags (driver, passenger, curtain) and ABS are standard in XLT/XLE versions to keep up with the passive safety benchmark, and you can now plug in an iPod or MP3 player – just don’t expect premium hi-fi from the six speakers. Rear legroom is still a shortcoming in the double cab, though jockeys would never notice. Diff lock is a very useful R2600 option.

Outside is where all the good new stuff happens. How about that bling three-bar grille and mesh backdrop, along with swept back headlight clusters? It looks better than the oversquare nose block of the previous generation, especially at it comes with a raised step in the bonnet, which Ford optimistically calls a ‘power bulge’ and foglight ‘nostrils’ in the lower bumper to visually broaden the front. At the back, the rear lights are more prominent and the bumper step simplified and better integrated. The new one piece sidebar is a bit glaring, though there is a tasty new set of 16inch alloys on offer, a neat foil to the chunky 245/70 tyres.

The diesel is pretty noisy on start-up and transmitted some offbeat vibes until it warmed up, but you can’t complain about 380 Newtons of tyre torturing twist, or that it runs out of puff from 4000rpm because you never need to go there. The manual ratios are well spaced and you don’t need more than 3000rpm even on steep gradients – which contributes to the truck’s excellent fuel economy. On an 800km trip to the Cederberg with four-up and a load, we saw 750km from 71.3 litres – or a realistic, achievable sub-10 litres every 100km. This for highway cruising, 150km of fair gravel road and a fair bit of slow grinding through rivers and up some steep banks. Just what you’d need this kind of bakkie for.

The ride is rubbery and a bit bumpy unladen. But generally the hops are well damped and settle under load. The proven leaf sprung rear and double wishbone front suspension feels bulletproof. One downside is a vagueness at speed, contributed to by overly assisted power steering, though it’s fine when busily twirling left and right during slow speed manoeuvres, which you have to do because it has the turning circle of a Sherman tank. The five-speed manual gearbox is pretty slick, maybe even best in sector, with rock solid, positive shifts, though there was some baulking on quick moves from 5th to 4th

The rest of the format is unchanged – strong tailgate, good loadbox size, massive rear differential. I particularly like the basic appeal of a solid lever to actuate the transfer case. It’s simple, there’s less to go wrong, and you know when it’s in or out of low or high range – no second-guessing a switch.

One criticism is that our test unit felt under-braked. The pedal initially felt mushy and needed sustained firm pressure when coming to a quick stop. The car gets a bit skittish on the rear, as per bakkie behaviour, before the ABS starts kicking in. Thing is, the diesel’s performance make it easy to forget this car weighs in at 1864kg unladen, yet still makes do with drums at the rear. 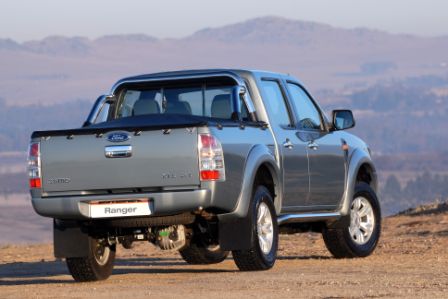 The new Ranger offers enough comforts to keep even the fussiest farmer happy, and it’s as rock solid as ever. Which is why it consistently ranks among the top selling one-tonner bakkies. It will take a serious 1100kg payload, is rated to tow 1800kg, and goes anywhere any other similarly equipped bakkie will. You might take issue with the 10000km service intervals, but not with a generous 5-year/90 000km service plan. The Ranger platform is the basis of the soon-to-be-locally-released third gen Ford Everest, a seven-seater SUV set to compete with the Fortuner and Pajero Sport. With the potential its leaf sprung rear offers for loadability, the Everest is sure to enliven an already busy battle for market share.