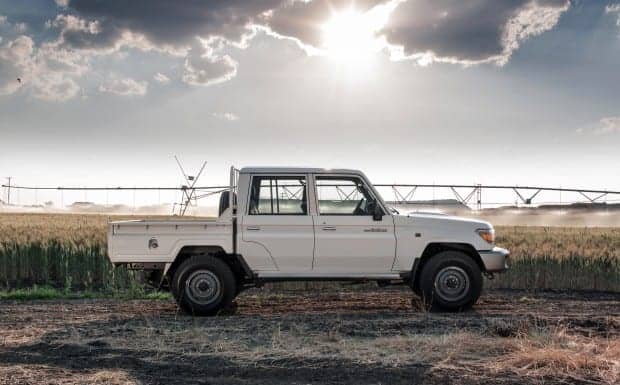 If Bismarck du Plessis was a bakkie he would be a Land Cruiser 70: big, brawny and indestructible. Plunging head first into any obstacle and overcoming the impossible is merely an everyday task for Africa’s workhorse. It’s that go anywhere, do anything attitude that has secured the Land Cruiser’s reputation as the ultimate adventurer’s choice of transportation, but now you have the added option of bringing the family along for the ride with a double cab version that still maintains the near one-ton payload.

The engine lineup remains the same for now, the chug chug 4.2-litre diesel still grafts away with an undying constitution and holds up fairly well on tar road situations. The 4-litre V6 petrol provides quite a pleasurable soundtrack to its considerable grunt. On the cards for the future is a V8 diesel that is currently undergoing tests in local conditions as well as fuel quality tests.

Additions to the new Cruiser include ABS that works in high range but then disengages for low range when proper 4WD conditions occur. The rear drum brakes have been replaced with discs. The entire range has undergone a bit of a chopping and changing but basically the Station Wagon gets all the nice add-on extras like carpets, SatNav, a USB port, 16-inch wheels and a 130-litre fuel tank (up from 90-litres).

The 78 Wagon gets front fog lamps and a mammoth 180-litre fuel tank.

Then the single cab 79 is newly equipped with chromed exterior trim, front fog lamps and colour-coded fenders. It also gets the big 180-litre fuel tank.

Finally the new double cab gets optional 16-inch wheels and the added interior niceties of SatNav and a USB port but is only equipped with the 130-litre tank.

Something not in question with the new Cruiser range is its off-road capability. Keen to show its skills the Toyota crew on the launch opened up an off-road route near Oudsthoorn that had been closed for two years since being deemed too difficult. The Cruiser ploughed through the dry riverbed laced with jagged rocks and impressive climbs and drop-offs, using every millimetre of the 235mm ground clearance available. Only on a section known purely as ‘the wall’ did the Cruiser falter. Attempting to pull of a wall ride worthy of a slot in a James Bond film one of the Cruisers ahead toppled onto its side. Testament to the strength of the beast, once it was returned to four wheels and left for a few minutes to settle it barked back to life, spat out some smoke and then shook off the incident like a wet dog. The same Cruiser carried on for the rest of the 300km route without putting a foot wrong.

Comfort-wise the double cab has been set up to be slightly more comfortable for passengers but sitting in the back is still quite a bouncy affair off-road where on-road it rides adequately. Vague steering on-road is just something you’ll have to put up with but when you’re trying to muscle it over rocks and crevices you’ll be thankful of the lightened steering setup.