This hybrid Golf MkI could be the only survivor of the Manufacturers’ Challenge Saloon Car series which promised so much in 1980 but ultimately delivered so little. It’s a sin that this real racer never raced the series…

Imagine something that weighs just 640 kilograms and makes 142 kilowatts. Some quick arithmetic and you get a power-to-weight ratio of 222kW/tonne. That’s quite a lot higher than, say, a Nissan GT-R.

Being a Colin Chapman disciple, when Durban businessman Kingsley Wood set out to challenge the motorsport might of BMW and Ford in the late 1970s with a Volksie, he knew the only chance for success in such a David and Goliath confrontation was to make the car as light as possible. And the best way to make it light was to build a steel spaceframe and cover it with the outer skin of a three-door Golf MkI, then use aluminium sheeting for the floor and finally to make the wheelarches and doors from fibreglass. With the 209kW turbo engine for which this car was designed, it had the potential to be quite something. 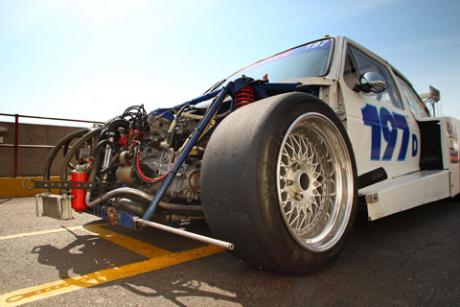 Wood and his brother Ralph contributed most of the labour, and were helped with suspension work and fabrication by Andre van der Watt, then a toolmaker for VWSA and now their motorsport manager.

The year was 1980 and the South African circuit racing fraternity was all abuzz with the Manufacturers’ Challenge Saloon Car championship, a no-holds-barred series which heralded a return to a national championship for tin-tops with many of the big names (both drivers and brands) taking to the track while enthusiastic crowds urged them on.

Sarel van der Merwe steered a V6-engined Ford Escort, Ian Scheckter was at the helm of a trick BMW 5-Series, and Dave Charlton weighed in with a fast but fragile Fiat 131 powered by a turboed Ferrari V6. Geoff Mortimer was in a V8 Chevair and there was also a Mazda 323 with a rotary engine, while a good few privateers made up the numbers. The promise was of more to come in 1981.

The rules were broad: cars had to look like the donor machine in silhouette, have the same suspension pick-up dimensions, be powered by an engine from the same stable, and, er, use the standard floorpan. This latter requirement was open to interpretation. Some builders read the rule to mean that a few squares inches of original floor would suffice, which is where the trouble started.

It ended in a massive crash between Scheckter and Supervan at the Kyalami finale, with both cars all but destroyed as they took each other off rather than yield. Expensive racing componentry was scattered across the highveld and in the acrimonious aftermath both brands vowed to stop competing rather than share the track with the other. The series rapidly rolled over and died.

For people like Wood, who had sunk a small fortune in time and money into the project, the news was devastating: for 1981 there would be nowhere to race the car he had just built. Not only that, but he was waiting for the imminent go-ahead on a R63 500 package which could’ve bought VW into the series as his main sponsor, making it viable to order a trick 209kW 1 420cc turbo motor from Germany.

That’s how it is this car has been in limbo for nearly 30 years, racing in the Kyalami Nine Hour on a furnace-hot day at the end of 1981 in Hella colours, retiring when the locally-built 1.5-litre turbo engine cracked its sump. Since then it has been raced here, there and anywhere it would fit in. That included a sojourn in Wesbank Modifieds (where, thanks to its spaceframe construction it was forced to race in class A against the likes of the Audi quattros) and after that Castrol Super Saloons, and now, historics.

It still looks fast, blasting into view as it exits the sweep which leads onto Zwartkops Raceway’s main straight in a flurry of engine noise and rapid-fire gearchanges. Colin Clay takes it through its close ratio ‘box and briefly into top before braking and going back to fourth for the fast right-hander which leads uphill. It seems to negotiate the turn at barely diminished speed and it is no wonder its roadholding has become almost legendary. Clay, a multiple saloon car champion (Star Modified in ’81, Wesbank Modifieds in ’83) still pedals like a demon at 60.

With everything nicely warmed up, he pits and hands over to me.

The original Momo wheel is surprisingly large which makes getting my legs under it a little challenging, and the interior seems to be festooned with mild steel tubes, so the installation process takes a while. Once wedged into a 30-year-old Corbeau seat and with the new ATS belts plugged in I take a moment to look around, noting the period instruments, the coarse fibreglass on the inside of the driver’s door, and the control panel with on/off switch and start button aft of the wispy gearlever.

Colin tells me the engine is good for 7 000rpm but I’ve already decided I’ll only use 6 500 and opt for third rather than second gear at the hairpin – like all the mature ladies I’ve driven for this track-test series, only a ‘husband’ has earned the right to really rev her engine. Another factor is that this time I’m driving the actual race car, rather than a replica.

There’s a raw, metallic clatter as I fire her up, punctuated by blam…blaam…blaaam from the exhaust as I blip at the throttle. I press the clutch – it’s surprisingly light – and the box slips easily into first with barely a murmur, so I gun it quickly down the pitlane and onto the circuit. I get up to a reasonable pace fairly quickly, mindful that Wood (who still lives in Durban and still owns Power King) has just arrived for the occasion, literally as I press the Start button for the first time.

I’m not particularly comfortable, what with the frame of the seat numbing the underside of my left thigh and the back of my hands colliding with my quadriceps as I twirl the wheel, but the car feels wonderfully responsive; all lighting-fast reflexes, feelsome steering and brakes, and slot-car handling. You can feed the power in hard and fast exiting the corners, brake late with confidence, and thread the gearlever briskly from cog to cog. There’s virtually no understeer and there seems to be a ratio to suit every corner perfectly. It’s a car in which you feel you could really give it a go. And with plenty of mileage under its flat-bottomed sump you can safely say ‘it’s sorted’.

Yet very little has changed fundamentally since it first turned a wheel. The Konis which originally suspended each corner have been swapped for Bilsteins, the rears operating on a cantilever principle a bit like a motorcycle swingarm, with the actual coil-over shock mounted well forward of the axle. The front is a MacPherson strut arrangement with the original hub casting as per CitiGolf, but obviously with suitable springing and damping. The steering is a normal Golf rack and pinion too, and like the suspension is free of foibles.

The Girling rear brakes – originally from a Lotus F1 car – are still in place, while the fronts have been changed for AP Racing callipers along the way. The engine is now a tractable naturally aspirated 2.0-litre eight-valve with a pair of Webers sucking without any hindrance from a filter and the dry sump lubrication is unchanged apart from the addition of an oil cooler. The same two engine radiators reside in the rear wheelarches, coolant brought forward by pipes inside the fibreglass side pods which, like the massive arches, add substantially to the overall width.

I should never have asked the question before taking the wheel, but the car has never been crashed badly enough to require replacement of a section of the spaceframe (every join in the mild steel is brazed, not welded, incidentally) and I’m proud to say that when I had completed my handful of laps, that was still the case. So as far as I was concerned, it was once again ‘mission accomplished’.

There is invariably much that is nostalgic about old racers, but this one positively drips with irony too. It sports an ingredient from the two cars which led, albeit indirectly, to its demise – Sarel’s Kolbenschmidt Escort and Scheckter’s Lo-Rider BMW. The tall rear wing of the Golf is the very item which came off the BMW after the big prang – it still has a ding in the fibreglass where it went backwards into a trackside fence – while the front spoiler is a Zakspeed part, virtually identical to the item fitted to the Ford.

In a way, they top and tail an era which we won’t see again.