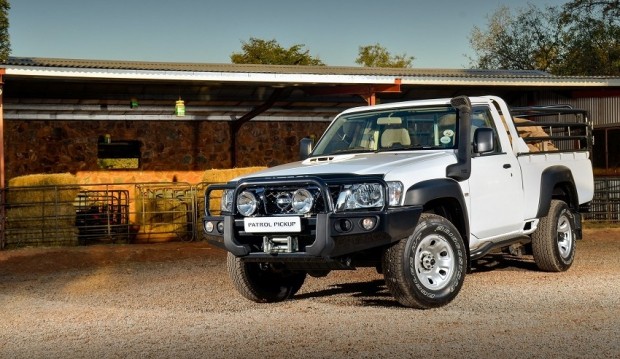 Never have I been to a place where two-tone khaki, jean shorts and high cholesterol are so dominant that it feels awkward to be dressed in full length jeans and a tee-shirt. NAMPO is to the Agriculture scene what Joburg’s International Motor Show is to car guys and this is where Nissan chose to launch its new Patrol pickup.

The new Patrol is very much the alternative to Toyota’s Land Cruiser, which Nissan say dominates around 90 per cent of the market share in the 1-tonne, single cab ‘worker’ bakkie segment. This new iteration has sprung a few upgrades over its predecessor, for one you now have electric windows which makes it much easier to reach outside and manually adjust the side mirrors. There’s not much else to be said for the interior though except that there are two cloth seats, a steering wheel and air conditioning for making it cooler.

The payload on the new Patrol creeps over the one tonne barrier coming in at 1090kg and to tug all of that along is a new 3.0-litre turbodiesel engine. The new diesel is smaller in capacity than the 4.2-litre of before but is more powerful at 110kW, has more torque at 371Nm and is also more fuel economic at 10.9l/100km even if it has two fuel tanks and 170-litres to burn. The engine cruises easily on road and feels comfortable at 120kph but acceleration to get to that speed doesn’t exert much in the way of G-forces on the body.

In order to shift gears there’s a long throw five-speed manual with a smaller, shorter throw lever next to it for engaging low range. A switch in front of the low range lever allows you to electronically engage diff lock if the terrain requires. Nissan say the new Patrol has been widened at the rear so the rear tyres follow more in line with the fronts, helping to increase stability on sandy roads. The Dueler tyres fitted to the Patrol are also standard and give the Patrol quite a rugged look with their off road biased tread.

After driving the new Patrol for a day its road manners proved quite comfortable over tarmac most probably thanks to the sidewall give in the Duelers. Steering is typically light and there’s a lot of play around the centre zone, often I could mimic a 90’s sitcom with exaggerated steering inputs without the Patrol actually deviating from a straight line. Once we took to the dirt roads the light steering comes into its own, as you’re not bombarded with feedback from every pebble on the gravel road.

The dirt roads did show that the Patrol is set up particularly stiffly with the corrugations from the farm roads felt harshly through the cabin. The rear leaf spring suspension also likes to dance to its own tune once it starts to skip over the bumps – meaning some steering corrections need to be made to get it back in line.

Loads of accessories are available to spice up the Nissan Patrol Pickup: from cattle grids to front bull bars, winch systems and side steps to name but a few. The price is fairly steep but remains in line with what the competition at Toyota is selling the Land Cruiser Pickup at.