‘THE OPTIMA IS a mainstream D-segment contender, not a premium D-segment opponent to the big Germans. We still have to earn our stripes’. An honest line, I felt, that resonated throughout David Sieff’s product launch presentation of Kia’s all-new Optima. Rather than deride the National Marketing Manager for his lack of brand enthusiasm, I actually appreciated the comment as it smacked of a modest grounded reality as to where the Kia brand and the Optima model find themselves amongst premium opposition. After driving the car and weighing-up its features for its price, it became clear, though, that his tactic was to under-promise but over-deliver.

Kia’s mantra of the Power to Surprise couldn’t be more apt when describing the Optima. While the model line-up for now is limited to a lone 2.4-litre petrol derivative mated with a six-speed automatic transmission, two high-output turbodiesel units, a 2.0 GDI and 2.4 GDi, are currently under investigation. Kia’s turbocharged 2.0-litre petrol unit from the US sadly remains doubtful, though. On the road, the current 2.4 gathers momentum steadily, but the 132kW four-cylinder is modest rather than manic in its power delivery, and shares the same hydro-formed subframe chassis as Hyundai’s latest Sonata. 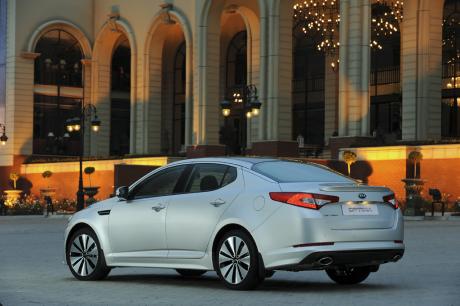 But that’s where the comparison between the Korean cousins stops. Apart from keener pricing and the addition of standard features like a 530-watt, eight-speaker Infinity sound system and Active Eco fuel-saving mode, the Optima offers a high-performance damping set-up with firmer spring rates providing a sporty dynamic character. This translates into a flatter body control, with sharper directional response on turn in and a more sure-footed feel mid-corner. Albeit a little vague and elastic off its centre point, the hydraulic power steering is speed-sensitive with adequate feel and feedback. The net result is a car that drives as well as it looks and (fingers crossed) those forthcoming diesels should enrich the experience even further.

That aside, it’s what the Optima offers in terms of styling, packaging (rear legroom and boot space) and specification for its price R305995 that should unnerve not only its mainstream D-segment rivals but the German competition in general. It starts with the exterior styling, where the Optima’s sleek, eye-catching design has already been awarded a Red Dot design award. The interior is well appointed and inoffensive, but does lack the tactile quality of, say, an Audi A4, if one really had to nit-pick.

The Germans can’t compete with Optima’s value, however, and also-rans such as the Sonata (R309900), Suzuki Kizashi (R317900),Honda Accord (R374900) and Lexus IS250 E (R380000) are all more expensive. For your money, rear parking assist, rear-view camera, Xenon headlights, a cooled glove box, multi-function steering wheel, Aux/USB/iPod and Bluetooth connectivity and Hill Start Assist are all standard fare on the Optima, with only the Panoramic sunroof as a R10000 option.

With more South Africans filtering from MPVs, estates and D-segment sedans towards compact SUVs, the sales success and demand for the likes of the Kia Sportage and Hyundai iX35 over the likes of the BMW X1 and Mini Countryman, show that the Germans can be beaten at their own game. But while the Optima deserves the same sales success, you won’t find Kia’s staff admitting to that just yet.