I ONCE SAW current Minister of Human Settlements Tokyo Sexwale arrive at a gala dinner at the head of a fleet of previous gen Jaguar XJs. As I settled in to drive the newest, even more upmarket version, I had to wonder what Toyko would think of the new car, considering he has urged cabinet members to spend less on transport, and to look at downscaling from their profligate S-Class Mercs and BMW 7s

My advice to Toyko? He should swap the back seat for the front seat of the new XJ, because it takes off where the XF underpinnings falter. The big cat feels light and agile for its size, turning in sharply, holding its line and tracking beautifully out of turns.

Put it down to the latest air suspension with continuously variable damping, a trick electronic differential and quick ratio steering, allied to an all-aluminium body which is 150kg lighter than any of the rivals. A few creaks at the upper limits expose the car’s positioning as a supple cruiser rather than a racer, but most owners, statesmen among them, will see that as a strength.

Visually, the XJ breaks with the uniformity of the past, design director Ian Callum boldly taking forward the XF front end, adding a swooping coupe profile and ending in a rear that polarises opinion. No argument with the low drag coefficient of 0.29, the panoramic sunroof that expands interior space for the amply accommodated five occupants (long wheelbase version adds another 125mm of rear legroom) or the generous boot with its 520-litre capacity.

The interior is a tactile and visual fest of wood grain, stitched leather and piano black, inspired by the opulence of Reva ski boats. Switchgear is claimed to be unique to XJ, though the knurled aluminium DriveSelect rotary gear control, which rises theatrically on start-up, looks close to the equivalent item on Discovery 4. New safety systems, including adaptive cruise control, borrow from the German and Swedish books of tricks, but the 8-inch dual-view touchscreen driver interface (which allows the driver to use the satnav while passengers watch a DVD), is an established Range Rover standard. It might not all be as intuitive as, say, Audi’s MMI interface, but what’s clear is that Jaguar plugs all the connectivity bases, with its hard-drive based media hub offering CD/DVD, radio, digital or analogue TV, Bluetooth connectivity and auxiliary inputs for devices from iPods to smart phones. And the optional 1200W Bowers & Wilkins audio system is sublime – on par with Bentley’s Naim or Audi’s B&O.

The local XJ line-up will consist of two 3.0-litre diesels and four 5.0-litre petrols, all coupled to a shift-by-wire six-speed ZF auto transmission. The 202kW sequential twin turbo V6 diesel shunts the XJ from 0-100kph in 6.4 seconds, while the 283kW entry natasp V8 petrol does the job in 5.7secs, the 346kW supercharged version in 5.2secs and the flagship 375kW version in 4.9secs. A high level of spec is standard, with three trim levels – Premium, Luxury and Supersport – and pricing from R920 000 to R1590 000 (see our GBU buying guide). Allocation numbers are being limited, so even if you are downscaling as Tokyo advises, get that order in quick. Our call? The entry petrol V8 is plenty.

There we have the measure: a trio of Teutons and one Lexus. If their nameplates read S-Class, 7 Series, A8 and LS460 you’re in the headquarters of motorised luxury. They own it, this quartet. They define flagship mobility.

And for a very simple reason: they cover all the bases in the last stop before über-ville, where Bentleys and Rolls-Royces waft along.

Allan Bloom’s book on the failure of higher education, The Closing of the American Mind, has some parallels with what’s happened in the upper echelons of car design. The thinking might be rigorous, but it’s also been channelled, rigged and closed down by the expectations of fashion – de rigueur. Luxury car makers embrace conservatism. 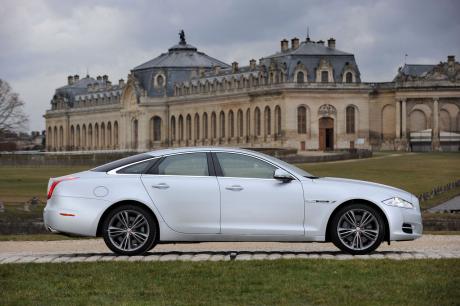 And why not? Differences between entry-level cars, for instance, are minute because parameters are so restrictive. There’s no latitude in terms of size or price. Variety only opens up in the compact and middle classes, mainly because of niche derivatives like estates, coupes, convertibles, MPVs, SUVs and bakkies.

Not in the upper segments. Where cars are expensive and clients few, proliferation grinds to a halt. The adventurous design spirit might balloon around its own girth, but it’s tied down at the top and bottom. In the luxury segment, we’re back to a common design solution, generally expressed in limo shape.

Perfection, after all, can only be embodied by a single vision. Hence requirements have been distilled into an instantly recognisable formula: more is more.

More power, luxury, refinement, equipment and technology . . . which also means more machine, all of it technicised by layers and layers of electronics that depersonalise the interface between driver and car.

Call it a ghost in the machine. And surprise, surprise, ghosts are an empty presence, as EPS (electric power steering) proves.

Enter Porsche’s Panamera and Jaguar’s new XJ. They have their differences, but there’s a spiritual connection: both of them sporty and pure.

Neither car attempts, for instance, to cover all the fancy de rigueur calls of the luxury segment. They don’t boast self-closing door functions. They’re not burdened by iDrive-type menu controllers. In the Porsche, systems are accessed by pushing buttons; in the Jag by touching screen icons. The XJ also eschews all-wheel drive, rear-wheel steering and electronic rollover control. Cruise control doesn’t perform a bouquet of circus tricks and the car’s front rides on steel springs.

It’s possible to argue that most of this is a function of R&D money – or a lack of it. XJ steering column adjustments are still driven by a single motor, which is slower and less-refined than two motors (one for height, one for reach).

But hey, you’ll be hard pressed to locate Coventry’s cost-cutting measures. Jaguar has pinched its pennies wisely. The rest of the car is so good you’ll soon forget any negative ticks on the item list.

All of this then, in lieu of chief designer Ian Callum’s ruthlessly unsentimental stance when it came to Coventry’s natural tendency to pamper the past. The future, he said, had to understand and modernise that past, not copy it.

The XK and XF followed, and now the XJ. All three embrace the spirit of grace, pace and space, recently rephrased as beautiful fast cars. Purity defines the core; sportiness the character; beauty the visage.

So, while our inimitable quartet of heavyweights (S, 7, A8 and LS460) champion industrial efficiency – where more is more on techno and equipment levels, and less is less in the styling stakes – Coventry’s latest inverts the equation: the charm offensive is as nuclear as techno interference is light.

The XJ can dance and looks magnificent doing so. The car is unashamedly dramatic and glamorous, inside and out. It grabs the senses and massages the soul, long after the V8’s rumbling growl or V6’s diesel whisper has been put to bed. Over a late-night Scotch, the playback in your mind is of sonorous sounds and agile handling.

The XJ had a head start. Part of its platform has been inherited from the old XJ, and most of its steering, suspension and power from the XF. No surprises then, to find such sweet integration of mechanical and dynamic elements. The package offers a choice of three greatly refined engines (a twin-turbo 3.0-litre V6 diesel and two 5.0-litre V8 petrols with direct injection, one of them supercharged). All three mills drive through a clever and extremely cultured 6-speed ZF auto box, while a trick e-diff deftly exploits maximum traction by instantly apportioning the appropriate torque bias to either of the rear wheels, no matter how sharp the corner or wet the road.

Low speed ride is slightly firm and wind rustle picks up at 110kph, instead of 120kph. The XJ’s aluminium monocoque and suspension components, supported by Bilstein air springs at the back and a hydraulically supported rack-and-pinion finely tuned to accommodate a sweet and easy touch, help ensure a more fluid, fluent and sporty drive than any other in its segment. It all feels so natural, right, sensual.

Nurturing all of this in a bold and stylish example of grand design is the icing on the cake, of course. Coventry has rediscovered the spirit of renewal and adventure, of glamour and drama. Open minds, in short, have derigged luxury mobility de rigueur. About time, too.