Though much of 1983 is a bit of a blur for me, being far back and all, I vividly remember lusting after the Ford Cortina XR6 and a number of performance offshoots from that basic concept, the most famous of which was the Interceptor, a limited edition homologation special built with an eye on class T of the Lodge Spark Plugs Group One series.

Launched in 1981, the Interceptor boasted triple downdraft Webers, a hot camshaft and a free-flow exhaust. This was enough to hike power to 118kW – about a 15% increase over the standard Essex V6 lump. And a lump it was, being heavy enough to cause ongoing tyre and suspension wear issues throughout the lifetime of the Cortina Mk IV and V.

Nevertheless, the whole car only weighed about 1 200kg and the result was a healthy power to weight ratio. With a relatively sophisticated rear suspension system for a Ford (coil springs, not leaves) it put its power down well and was thus quick off the line. Ford claimed a brisk 0-100 time of 8.6 seconds and a slightly less impressive top whack of 196km/h for the Interceptor.

With a direct drive fourth gear, 3.08:1 differential and with 185/70/13 rubber, my calculations suggest it would be pulling about 5 600r/min flat out, which equates more or less to the power peak of the engine. More mundane 3.0 litre Fords made maximum power of just 102kW at 5 000r/min – a rev range almost diesel-like by modern standards.

The Interceptor also sounded a bit different, with a more menacing burble when cruising and an occasional lumpiness to the idle quality. Spotting it was easier still. All 250 were a unique red with a hint of pink to it. Ford called it Wild Coral.

The distinctive Ronal wheels were especially imported from Germany and they’re more or less the only thing on our photo car which aren’t correct. The inner section of the rim has been painted black, whereas they came from the factory in a pure aluminium alloy finish. They have also been widened by an inch to measure 6.5J. Still, the actual style is correct. 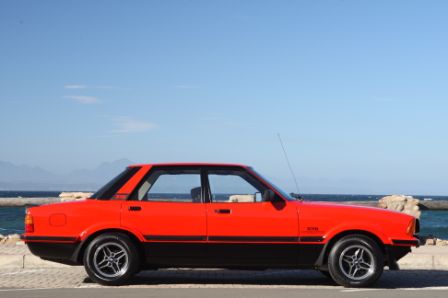 Other than that the 1982 car now owned by Mossel Bay collector Sarel van Niekerk is quite remarkable in its originality, especially considering how popular they would’ve been with the Boy Racer brigade. This car may have been expertly resprayed, but the interior is pristine, the cloth upholstery on the Scheel seats impressively unsullied. Back in those days dashboards and steering wheels didn’t stand up well to the sun so it is obvious this car has lived indoors for most, if not all, its life.

The mileage, around 96 000km, suggests that it hasn’t been overused either, working out at some 3 500km a year.

This is a recent acquisition and it came complete with a Certificate of Authenticity and the paperwork which shows it was sold by Cassey’s Ford on the East Rand to one JFP Knoesen. Sarel loves it for a number of reasons, not least of all because when he was younger and more ‘windgat’ he bought one new, selling it after about two years to buy a Pontiac Trans-Am. In fact he’s a bit of a sucker when it comes to American-style Vees – the balance of his car collection (bar a rare Mazda bakkie with a two-stroke twin) all have eight cylinders in a Vee configuration under their bonnets.

The Interceptors as campaigned by Ford Motorsport and driven by another more famous Sarel were white in colour, with pinstripes in various shades of blue down the flanks. This led to the birth of the XR6 TF – for Team Ford – from April 1983, which mimicked this livery and also had cheesy spotlight covers. But by this stage enough proper Interceptors had been built to meet the homologation requirements and these TF cars only had the cooking V6 under the bonnet. The timing suggests it was something of a limited edition run-out model and the Sierra started to replace the Cortina from about September, though Ford performance fans had to wait until April 1984 for another one wearing an XR6 badge. Unfortunately, another 25 years on we’re still waiting for the ‘Interceptor’ to make a comeback.

The XR6 Interceptor is often dismissed as crude and simplistic, and it is hard to argue. But it was a surefire path to decent performance in a spacious and practical family car. More importantly, it led to cheaper, more fuel-efficient solutions to getting extra grunt from an Essex V6, the most notable of which was the Holley-equipped X-Ocet of 1983. If you own a uniquely South African road car (we’re still looking for a Renault Alconi and a Toyota SR5 Silver Wolf/Black Hawk) drop us a line on editor@topcar.co.za or adrian@roadworx.co.za.