Daihatsu recently updated its cutesy Terios and invited us along for a weekend adventure to sample its charms. At face value this vehicle is a fun city clicker with faux off-road pretentions, equipped as it is with a small motor and no low-range transfer case.

The new Terios comes across a bit more butch than previous generations and although its diminutive dimensions prevent it from appearing manly, it can be described these days as handsome. Style lines are clean and bluff with a square-jawed frontal aspect and the flared wheel arches lend an air of athleticism. The overall impression is one of simplicity devoid of fussy detail, a theme that also characterises the interior. While the plastics are a mite hard to the touch, fit and finish are impressive in this price bracket and there was not one rattle during our three-day adventure with the Terios. Seats in particular, which were clothed in a dark and durable looking coarse weave material, proved remarkably comfortable over long distances on all sorts of terrain. My driving companion did however lament the lack of a sturdy grab handle to hang on to over the rougher stuff.

Other comfort features include air conditioning, power windows and electronically assisted power steering. Various bits and pieces such as the steering wheel and gear lever will appear familiar to anyone who has driven a Toyota Corolla as they have been nicked from the same parts bin. We were rather thankful that front and rear fog lamps made the standard specification list as we arrived in Sabie in filthy driving conditions characterised by swirling mist and lashings of rain. Safety concerns are further addressed with the standard fitment of dual airbags, ABS brakes with EBD and doors fitted with side impact beams. 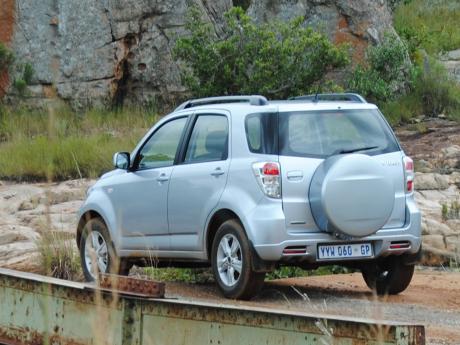 With only 77kW and 140Nm on tap rapid progress cannot be expected from the high riding but commendably light CUV (Cute Utility Vehicle), so a firm prod of the accelerator is required. The 1.5-litre petrol mill responds kindly to revs and goes about its business with enthusiasm, so it never feels slow provided the revs are kept up. Our trip to Mpumalanga was made convoy style at less than the national limit and here the vehicle felt a little lethargic when responding to throttle input. The return journey was undertaken solo at a brisker pace and the motor excelled, easily maintaining the limit without feeling strained and not requiring any of the downshifts of the outward bound journey. Our own tank to tank fuel observation also suggested that the spirited driving was not unduly punished at the fuel pumps as our example, a SWB 4×4 derivative, returned an average fuel consumption of 7.9ℓ/100km, which included a fair mix of gravel, off-road and highway driving.

What surprised most was the off-tar capability of the Terios. Our daunting route included miles of high-speed gravel, dirt roads so slippery one could barely walk on them, and loose rocky tracks. There were times I missed the luxury of low range but the plucky Terios ventured on regardless. To a large extent the vehicle’s off-road capability is thanks to extremely short overhangs and a healthy ground clearance of 205mm. Despite the high stance the ride is comfortable and secure on gravel or tar provided one applies the sensible high centre of gravity rule of not indulging in sudden wheel movements when driving at pace. Many of the larger obstacles were severe enough for my driving companion to eject from the cabin in order to ‘take a few photos’ while I tackled them. Not only did the Terios crest them, but not once did it scrape the underbelly or nudge a bumper. Apart from permanent four-wheel drive, there’s the standard centre diff lock, engaged via a dash mounted button, ensuring that traction is always on hand. There may be some 4×4 routes that will prove a bit too challenging to the Terios, but they will be fewer than you imagined. For most of the off-road use owners are likely to undertake, the Terios will prove more than capable. Fuel bills will be low and environmental impact light. In these times of carbon footprint taxes this factor should be borne in mind. Daihatsu indicated that the new CO2 tax will add around R6000 to the vehicle’s sticker price. The penalty for larger capacity 4x4s will be far greater!

Terios pricing starts at R209900 for the entry 4×2 model, but you will want the 4×4 version, so expect to pay R234995 for the SWB model which includes a 100 000km warranty and a standard 3-yr/75000km service plan. Both 4×2 and 4×4 models are available in LWB seven-seat layout and you can also choose from one of three automatic variants. Finding competitors for the Terios is not easy. Suzuki’s Jimny is cheaper and has impressive off-road credentials to boot, but will not carry four in as much comfort or cruise as effortlessly as the Terios. This is an endearing vehicle and initial concerns about its performance and capability are soon dispelled as its ‘can do’ nature, good packaging and comfort win you over.