WHAT IS THIS? A Nissan Qashqai-sized SUV proudly sporting Andre Citroen’s now heavily-stylised logo on its prominent snout? You bet. Citroen wants a piece of the booming compact SUV action and has gone the business-savvy joint venture route to get it. So the C4 Aircross, along with its Peugeot 4008 stablemate, borrows platform, running gear, certain drivetrains, doors, windscreen and interior architecture from the very Japanese Mitsubishi ASX.

With the local launch planned for around the time this issue hits the bookshelves, Citroen SA invited us to France for an early drive. First impressions of the new model lined up in the parking lot of Lyon’s Saint Exupery airport, named after one of France’s aviation heroes, certainly ticked all the right boxes on the exterior styling front. While the bold double-chevron grille shows an extreme case of middle-age spread, the C4 Aircross strong locomotive-like chin, vertical daylight running lights, reverse shark-fin D-pillar detail and flowing French curve shut lines do a convincing job of impersonating a real Citroen. 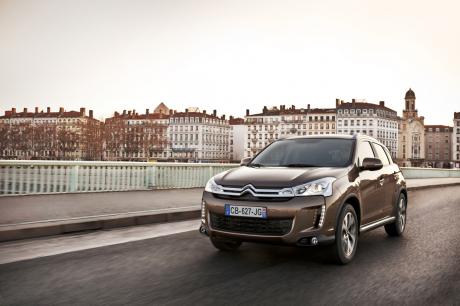 However, if you are fooled by the exterior, you won’t be by the interior, which though utterly inoffensive is just too conventional (read flair free) to ever be considered French. Yes, it does have a Citroen steering wheel, but then donning a beret won’t transform you into a sophisticated creative with a penchant for industrial action and garlic either.

Intrigued by the nuts and bolts of this ASX-to-Aircross transformation, I cornered Stephane Dannenhoffer, whose job title translates directly as Responsible for the Industrialisation of Style, and asked him for a guided tour. Unsurprisingly, much of the budget went towards giving the exterior more distinction. You should always be able to recognise it as a Citroen, even from a distance, he offered, adding we worked a lot on the details such as the chrome window line, the compass graphic on the floating side pillar and the rear lights that identify it as a member of the C4 family. He says the doors have more sound deadening material too, demonstrating that they shut with more of a reassuring thud than their Japanese counterparts. Apparently, revised wheelarch linings also boost refinement by allowing less noise to intrude into the cabin.

And the interior? You’re always touching the steering wheel, says Dannenhoffer, so that’s specific to the Aircross. Apart from that, just a touch of chrome detailing and brand-centric seat fabrics separate it from the ASX and 4008. Clearly, the

emphasis was on bringing a compact SUV to market without blowing an R&D budget better spent on additional DS models like the forthcoming DS3 convertible, amongst others.

So the Aircross is not your typical Citroen, but does that matter? To the purist, possibly, but not to the new compact SUV buyer that Citroen is seeking with this vehicle. These customers will not notice that, even over these fine French country roads, the Aircross doesn’t quite ride with the cosseting plushness of many of its forebears. But they will be aware of the fact that it steers, rides and handles as unremarkably well as most mainstream hatches, thanks to speed-sensitive electric power steering and MacPherson strut front, multi-link rear suspension set-ups. Neither will they be phased by the unimaginative cabin design. Instead, they’ll appreciate the soft-touch cladding applied to the main facia panel, the simple, solid switchgear, the sensible ergonomics, the 416-litre boot, fold-flat split seatbacks and the reasonably generous rear legroom.

On the tech and kit front, range-topping C4 Aircross buyers will be pleased to encounter such luxuries as 30Gb HDD-based touch screen navigation including 10Gb dedicated to music storage, a reversing camera, a CD/DVD player, 710 Watts worth of Rockford Fosgate sound, USB and Aux ports, Bluetooth audio streaming, a panoramic sunroof and a cooled cubby hole.

The launch route took in loads of picturesque countryside around Lyon, affording plenty of time to notice the Aircross details, like how the pronounced bonnet contours create a visual link between interior and exterior, and how unrewarding the continually variable transmission (CVT) can be when driven with any enthusiasm. Over the two-day event, I sampled both a (Mitsubishi based) 4wd petrol 2.0-litre CVT-equipped version and a 1.6 HDI diesel (by PSA) manual front-driver. Of the two, it’s the 84kW/280Nm turbodiesel that easily gets my vote. In combination with the chunky six-speed box, it offered an infinitely more engaging drive with the added bonus of a stubborn fuel gauge.

To be fair though, the 110kW/197Nm 2.0-litre petrol’s chance of impressing was blown by the first incline, a victim of Japan’s fascination with CVTs that scream like dissident revolutionaries about to be beheaded whenever you need to floor the throttle. This masks the engine’s characteristics, leaving you with no idea of the actual torque delivery and overall efficacy of the powerplant. Driven back-to-back in these configurations, it’s no wonder Citroen spokespeople are most proud of the integration of the HDI motors.

Interestingly, no dirt was harmed in the making of this launch. But then these are soft-roaders by definition as well as specification. Sure, the electronic select-on-the-fly 4×4 version can shift up to 70 per cent of the torque to the rear wheels when in Lock mode (not to be confused with the deployment of a pukka diff lock), but a meagre 168mm of ground clearance means the C4 Aircross is definitely no rock-hopper. However, experience with Mitsubishi’s 4×4 system does suggest it’ll be more than capable over gravel roads.

The C4 Aircross in a nutshell: fairly competent, but probably needs a stronger hook to lure punters away from the plethora of established rivals.