Win a Mercedes-AMG GT S or an Audi TTS 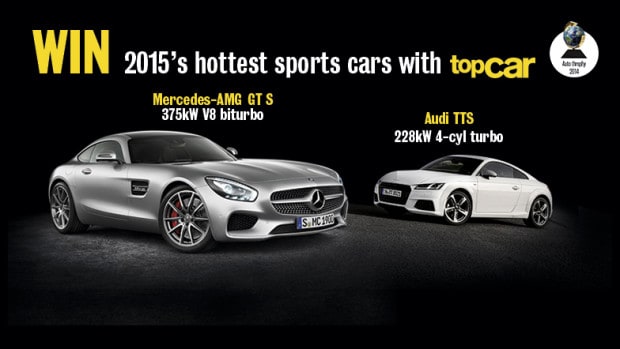 Want to win a spanking-new Mercedes-AMG GT S or a freshly-minted Audi TTS? Then vote for the world’s best cars in TopCar and Bauer Media’s new survey.

You could be one of the world’s first owners of the new 375kW, rwd Mercedes-AMG GT S or the 228kW Audi TTS. All you have to do is tell us about your favourite cars and you’ll be entered into a prize draw to win the top-of-the-range Mercedes or Audi.

The Bauer Media Group, of which TopCar is a licensed affiliate, is hosting the global Auto Trophy competition, in which readers from around the world can vote for the World’s Best Cars. So vote today for your chance to win Mercedes exciting new Porsche 911 rival or an all-wheel drive TTS.

Voting will close on November 5. The votes will be tallied in November 2014 and the Auto Trophy: World’s Best Cars will be announced at a gala dinner. The lucky prizewinners will be notified at the same time.

All entries will be entered into the draw. Employees of the Bauer Media Group and Media24 as well as their relatives are not permitted to enter. Participation via third parties is excluded. One entry per person. The competition is being run across a number of Bauer magazines in many countries. The judges’decision is final. The car prize will be the stated mode with the basic features and previously established extras. The prize does not have to correspond to the model photographed here. No cash alternative is possible. Winners will need to make their own arrangements to collect the vehicle from a Mercedes or Audi dealership. The winner will be notified in writing and must confirm receipt of this notification within seven working days otherwise a new winner will be chosen.