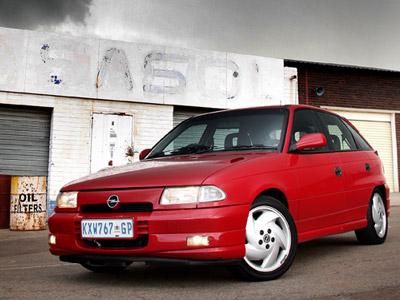 It isn’t often that a manufacturer launches a vehicle and then revises its power output downwards. Well, that’s what happened with the Kadett 200tS, a fearsome version of the Opel compact which gave new meaning to the term ‘hot hatch’. With 160kW and 280Nm there was nothing like it 15 years ago. Today they aren’t huge numbers for a 2.0 litre turbo, though Opel fans will be quick to remind anyone who’ll listen that a current Golf GTI only makes 147. The point of course is that the Opel weighs nigh on 200 kilograms less than the modern equivalent and while turbocharging was not quite in its infancy back then, it was a lot more basic. So too was engine management, and tyre and chassis technology. So, simply put, the 200tS was a beast.
Torque steer in gears one and two could be fearsome. With a limited-slip differential, you had to be very careful which way the wheels were pointing, especially if the road was anything less than perfectly dry and flat. It was a bit like taking a deranged Staffordshire for a walk down a road where there’s a cat atop every garden wall …

It was better in the higher gears and if you fed the power in judiciously as the road straightened, you could really slingshot from corner to corner, neck muscles straining to free one’s hairstyle from the headrest. You couldn’t let your guard down for an instant. Of course, it did depend on what preload settings – there were apparently three – were used inside the limited-slip differential. Like the Superboss, the tS had a final drive unit from Gemini Transmissions, the company founded by South African engineering genius Andre Verwey. Based in the United Kingdom by then, he supplied the LS units to Getrag, who then fitted them to their six-speeder (reluctantly, it must be said) and shipped them to South Africa. The deal was that all gearbox repairs would be done on an exchange basis, with broken units returned to Germany. Getrag would not even supply Delta the special tools required for stripping the ’boxes. Early cars experienced overheating problems however, and from mid-1994 advertising and brochure material appeared listing outputs of 151kW and 285Nm. Though outwardly similar, cooling efficiency was improved but at the cost of a few kilowatts.

In my Drive! magazine days I tested the original car and I remember Mike Briggs collaring me at Goldfields Raceway and as a Delta works driver taking umbrage at our road test. He said we were too critical of the torque steer. His frame of reference though was that of a race driver in his prime – at that stage he was piloting the Astra touring car after an unsuccessful sojourn in the Calibra Wesbank racer. Ah, the Calibra, a car to which the 200tS owes if not its birthright, then more than a nod of acknowledgement. Engine internals are virtually identical to those of the Turbo version, but the drivetrain of the Kadett/Astra 200tS was local and two key aspects – the intercooler installation and the engine management – were researched, developed and manufactured right here. That’s why the car has almost no turbo lag, and why it is such a pleasure to drive at normal pace. Rolf Mentzel, who was closely involved with the early stages of the project, remembers regularly driving from Port Elizabeth to Bosch’s high-tech facility in Brits. Development cars were in such short supply that they couldn’t leave one there permanently.